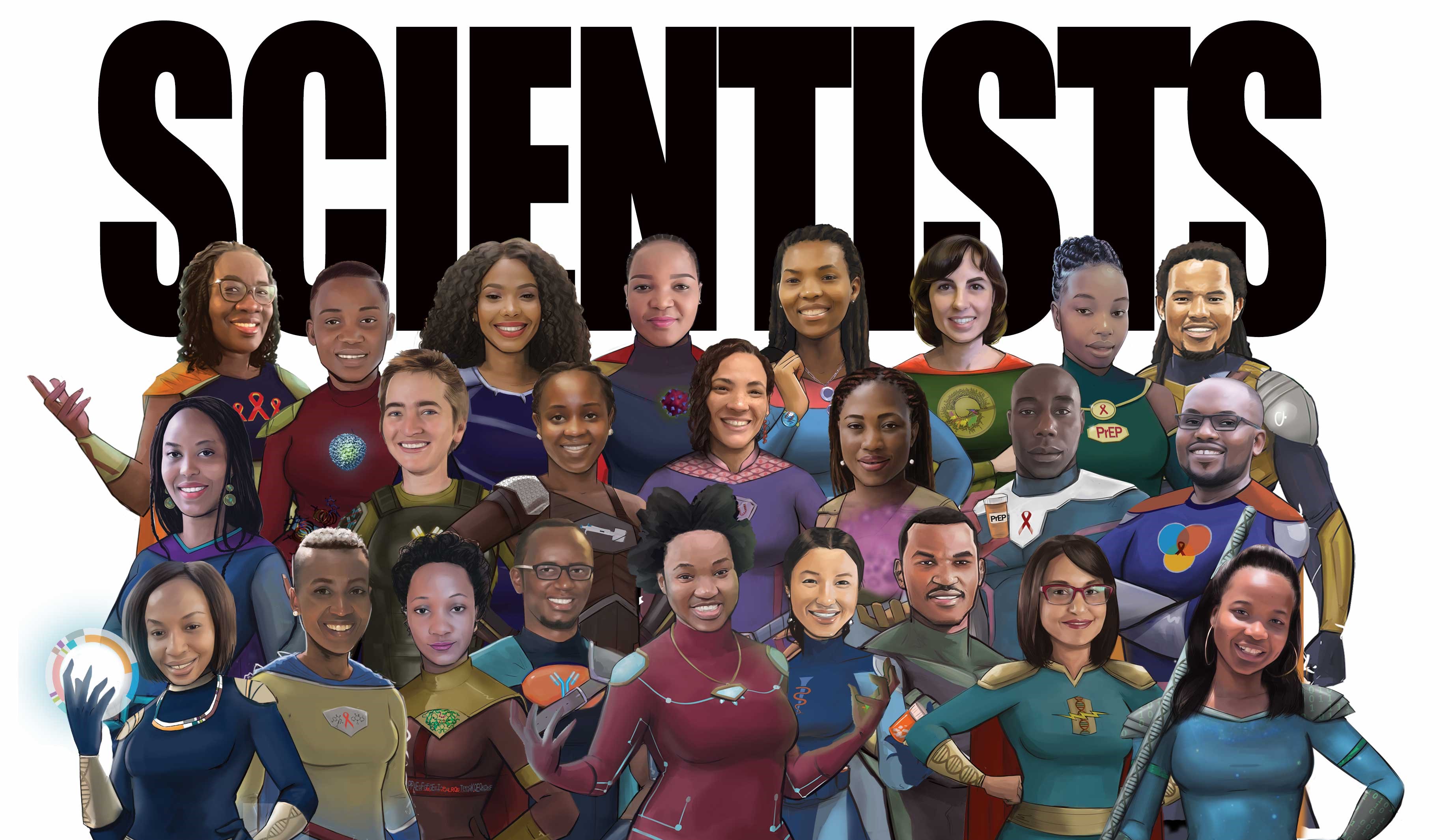 Although women have achieved equal numbers to men at early stages of scientific training, there are still fewer women in scientific leadership positions worldwide.

Maphe Mthembu is a SANTHE PhD student at the Africa Health Research Institute (AHRI) in Durban, KwaZulu-Natal, South Africa. In her research, she studies the impact of HIV infection on immune function in the lungs of patients with latent tuberculosis coinfection.

In this article, Maphe describes her community engagement project, supported by the DELTAS Africa Community and Public Engagement (CPE) Seed Fund for gender equity in science. In collaboration with CodeMakers (a South African science education project) and the Sub-Saharan African Network for TB/HIV Research Excellence (SANTHE), she developed a PowerPack of SuperScientists to identify, raise awareness of and counter gendered narratives that block women’s career progression in science.

Superheros in the fight for gender equity

This CPE project focussed on the long-reported issue that few senior leadership positions in science are held by women. Gender equity is rarely discussed or tackled in scientific institutions and society as a whole. 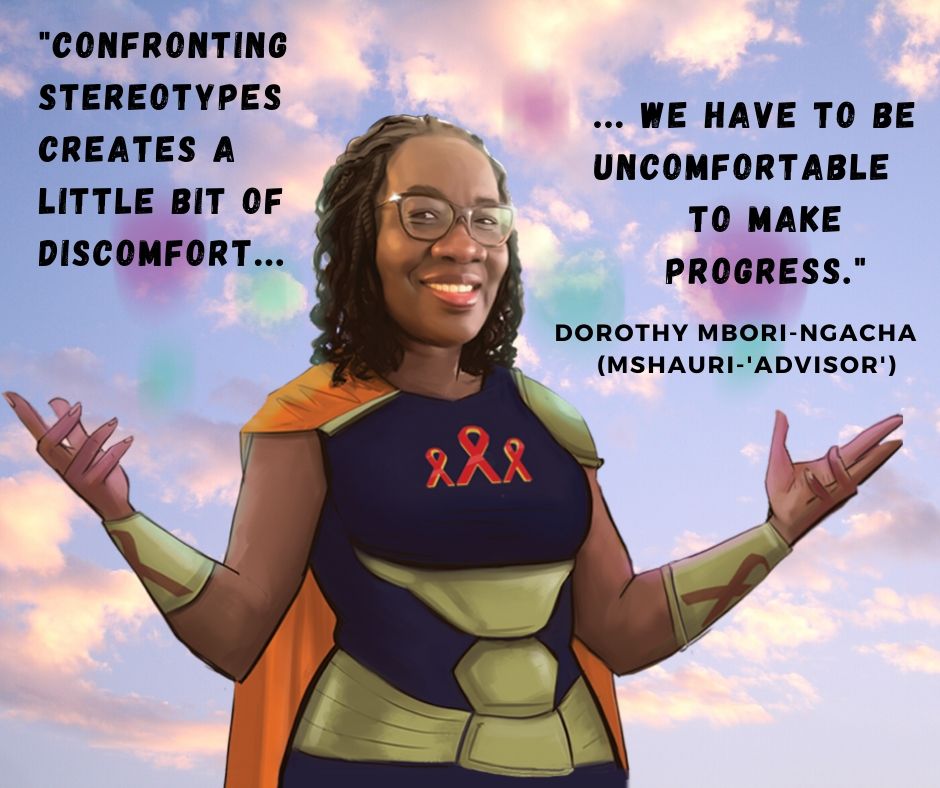 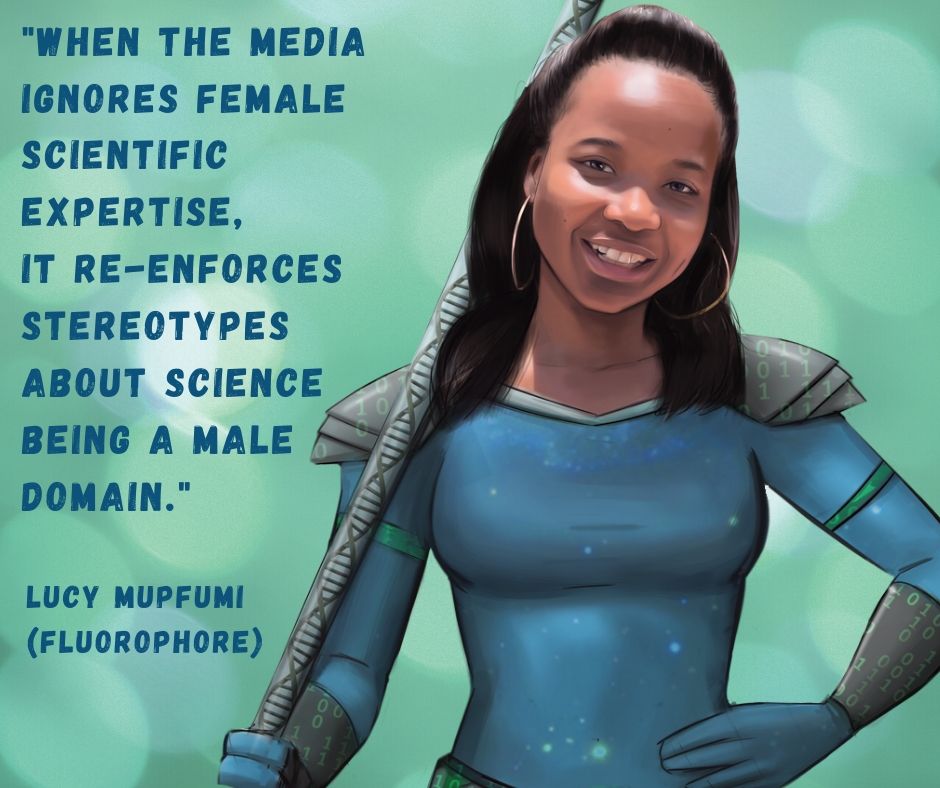 We ran a social media campaign to raise awareness, held webinars to develop a discussion into how to change narratives and enable female scientists to progress in careers and produced activities for schools to inspire the next generation.

We created a PowerPack of SuperScientists to promote gender equity in science of biomedical scientists of both sexes and all career stages from the Sub-Saharan African Network for TB/HIV Excellence (SANTHE). We invited all SANTHE trainees and supervisors to be involved and there was excellent participation, with over half of the researchers completed an application form. We selected 24 individuals, who showed the most interest and covered a range of research areas and career stages.

We then collaborated with CodeMakers to transform these scientists into SuperScientists with avatars and profile cards. Using these profiles we have also made a calendar and activity packs to share with the community to help raise awareness of gender equity in science. 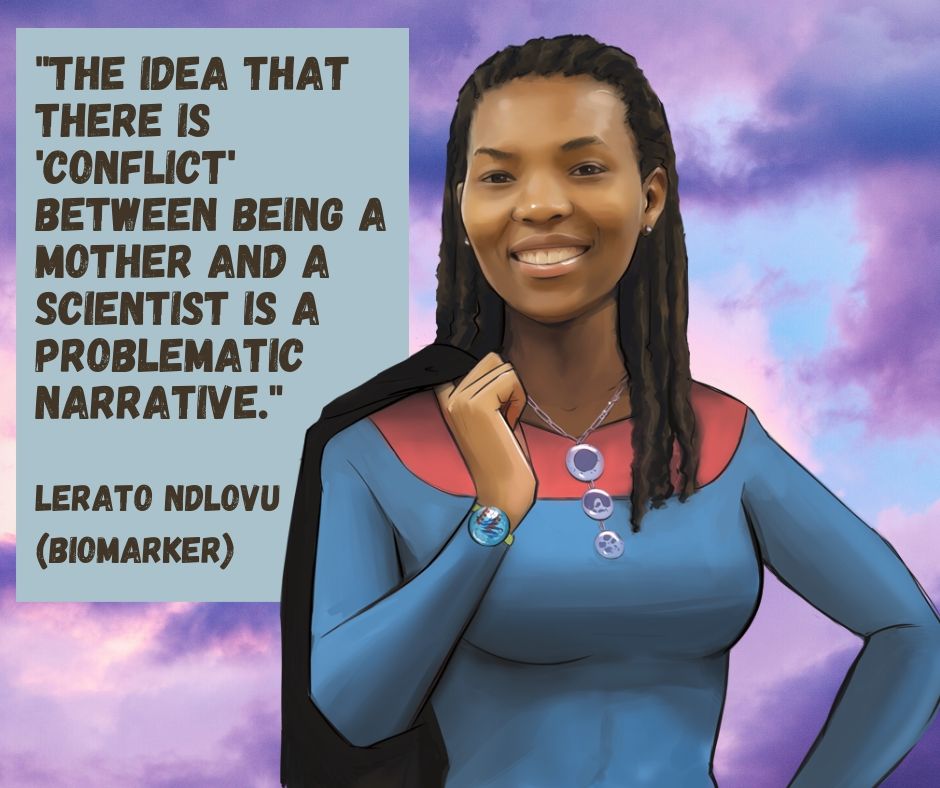 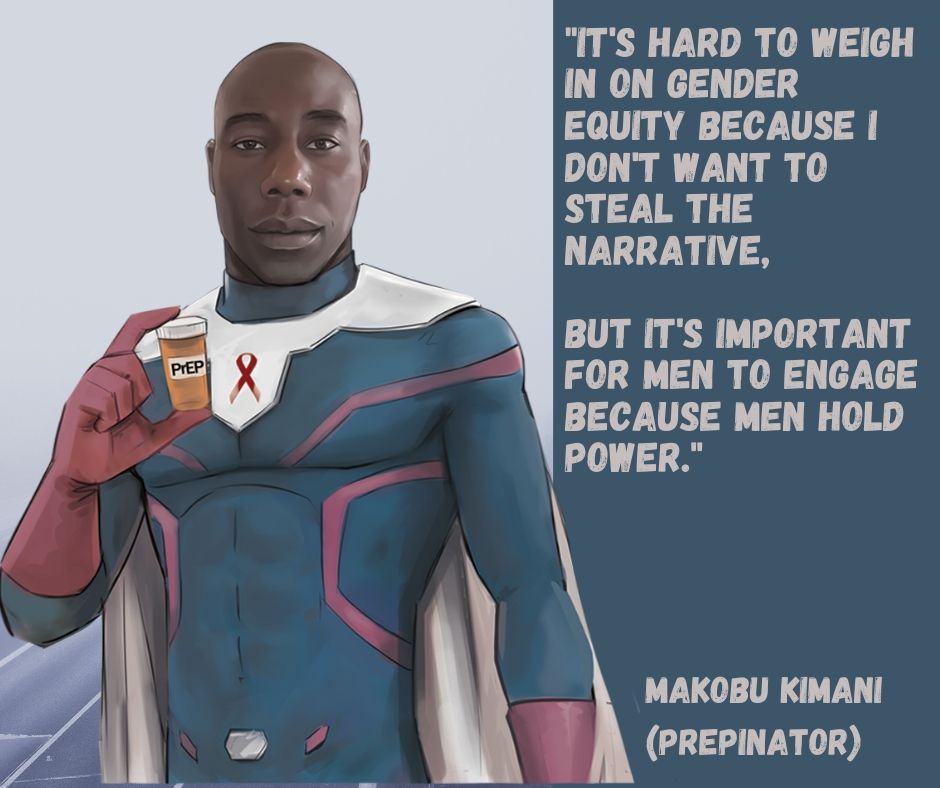 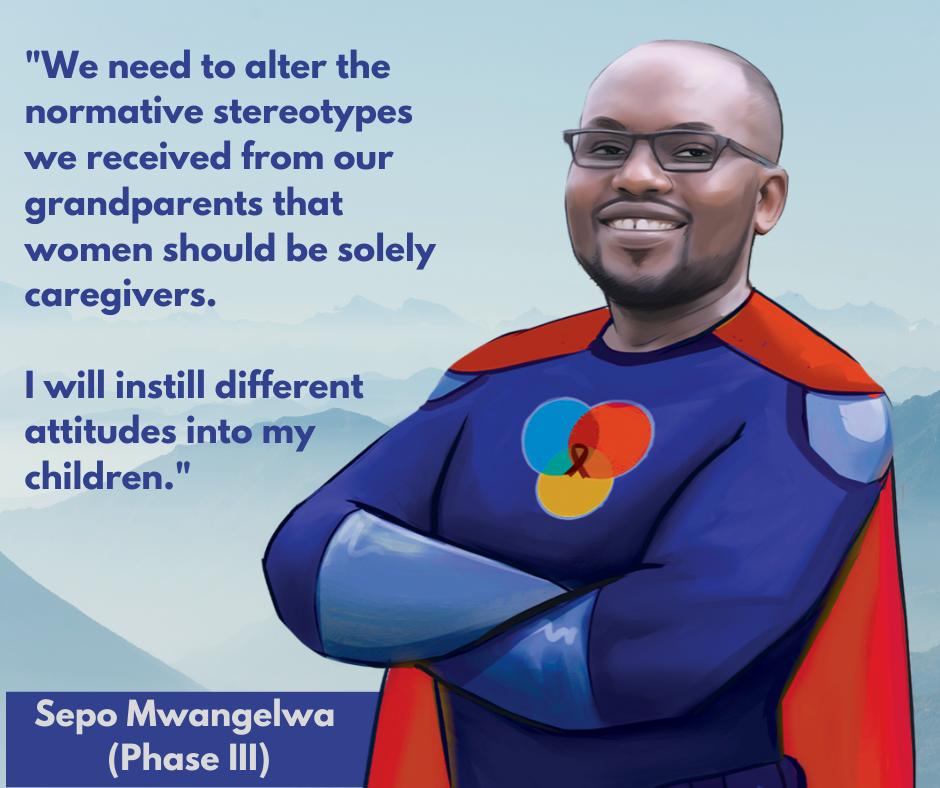 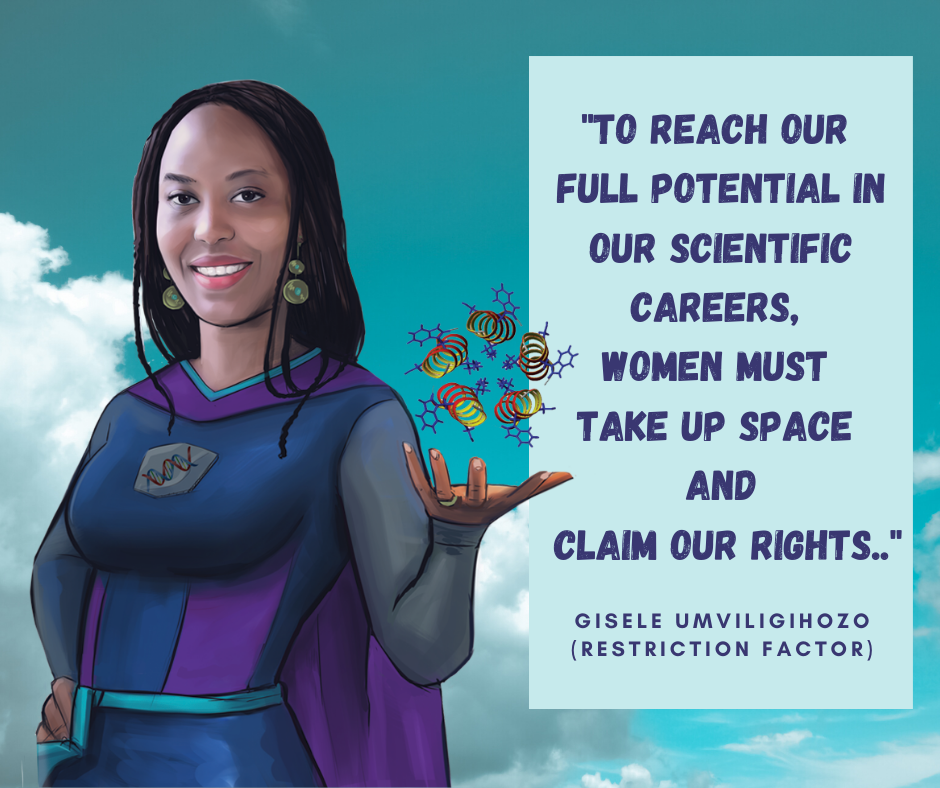 For the campaign we identified key themes about gender equity in science:

We asked the SuperScientists to give their thoughts on the three focus areas and then shared their quotes and SuperScientist profiles on our social media platforms. 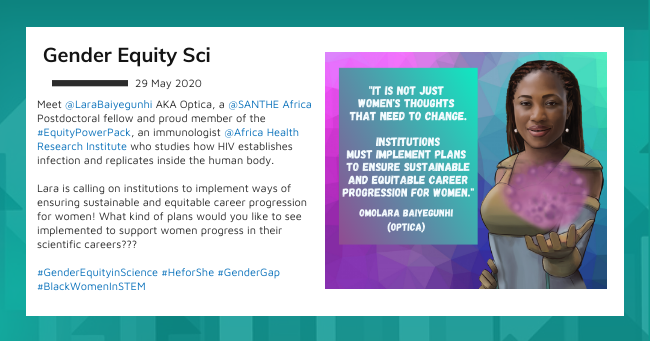 Through the online campaign we were able to raise awareness about gender equity narratives blocking gender equity in science with the public and in return hear their insights on the solutions that could be used at individual, societal and institutional level. 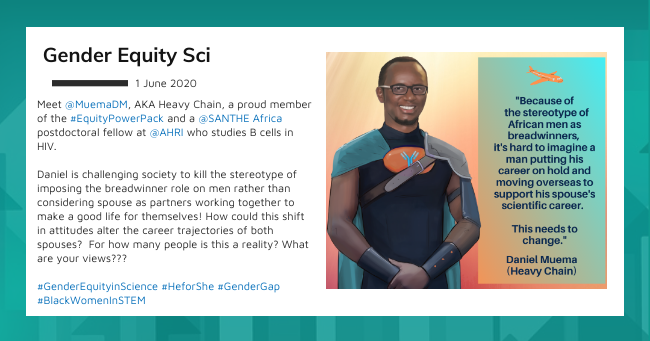 Alongside the social media campaign, we held two webinars to reach out to the scientific and non-scientific communities about gender equity narratives that we had defined with the powerpack members. Our speakers communicated some solutions that could be used to fight the narratives.

One webinar session focused on individual and societal solutions and the second discussed policies that can be put in place in institutions. The recordings were made available on our social media platforms. 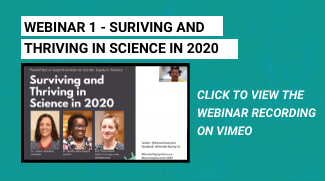 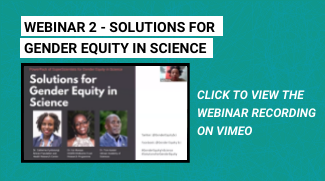 Topics covered included the issues of the wage gap and lower funding award rate for women. Gender pay gaps means women are more likely to quit, so there is a need to ensure that positions with the same qualifications, levels of experience, responsibilities are paid equally for women and men. Adequate paid maternity and paternity leave, including for students is necessary to allow women to return to work after having children, and challenges the narrative that childcare is solely the responsibility of women, shifting mindsets towards men also being caregivers.

Some institutions are supporting women with children who need to travel to conferences to complete their PhD by funding travel for children under 3 and a childminder to travel with them. Other steps institutions can make include having flexible working hours, onsite and subsidised childcare, well equipped and adequate lactation spaces.

Willingness of leadership to implement these changes is essential to produce change. We need more women in leadership, who can act as mentors and be more inclusive leaders. 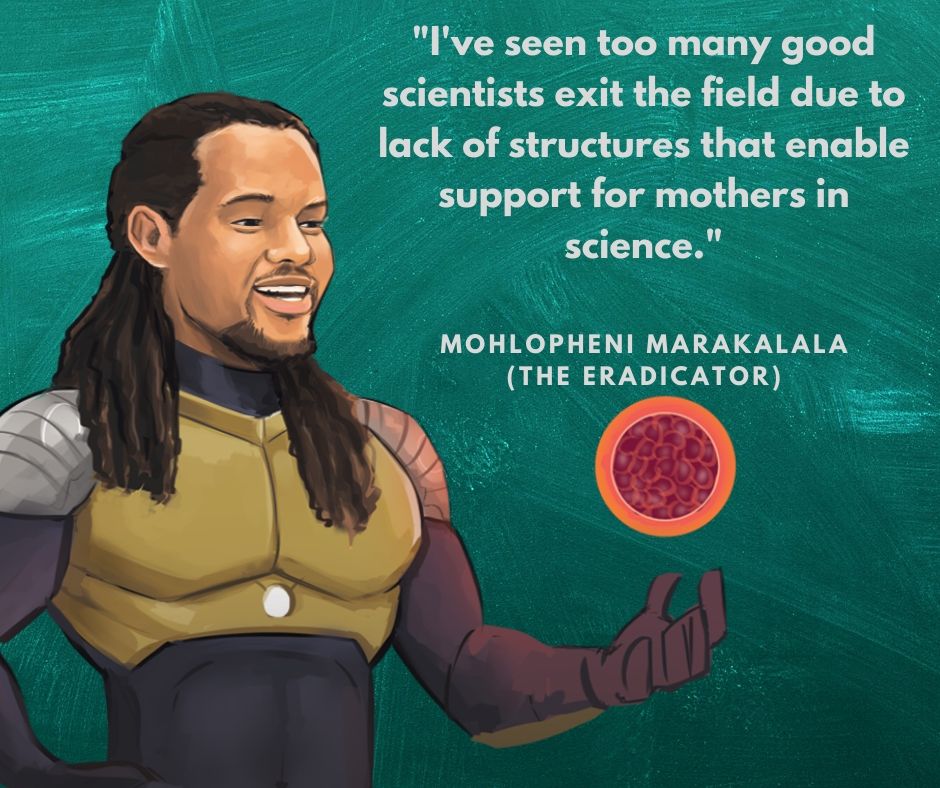 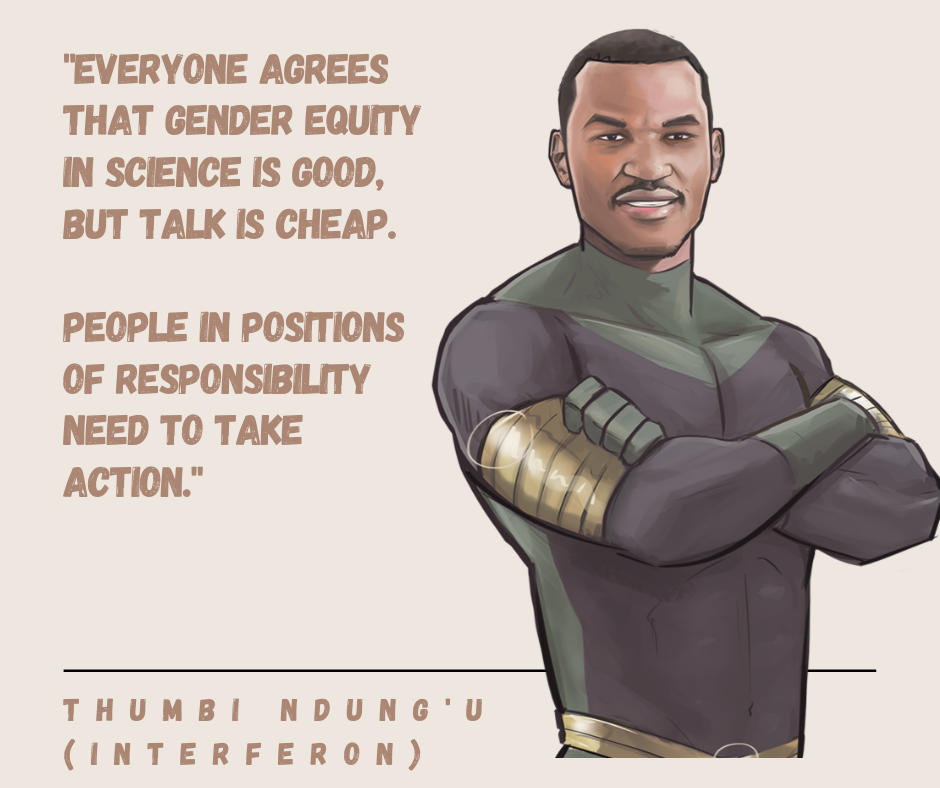 Men can become allies by listening to the experiences of women. Women are taught to shrink themselves; we need to unlearn this and be unapologetic about taking up space. Women need to speak up, but we don’t always have access to platforms to use our voices, so men should give space.

Inspiring the next generation of scientists

Our mission is also to educate and inspire young people to be involved in science, regardless of gender, so that the narratives that hold women back in science are not perpetuated in the next generation.

In addition to the online campaign, we had planned to take the PowerPack of SuperScientists to two local schools to share SuperScientist cards and poster material with students and showcase the paths in science that the SuperScientists have taken. Due to COVID-19 restrictions we delivered the engaging material to schools and with a video to explain how they could use the material to engage students with the project. 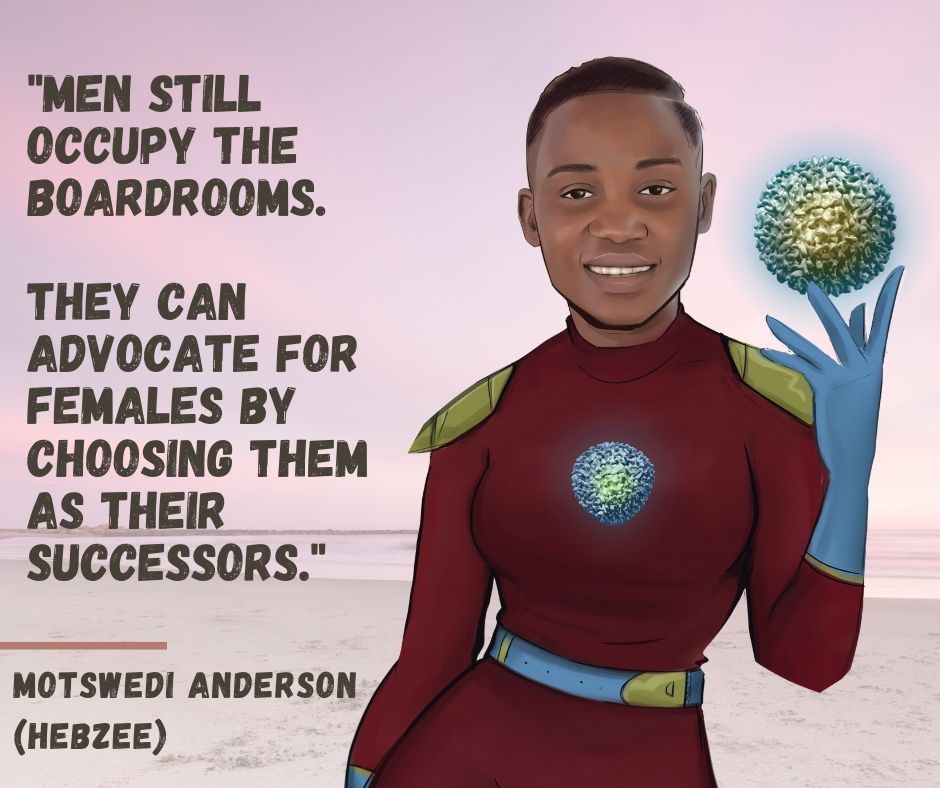 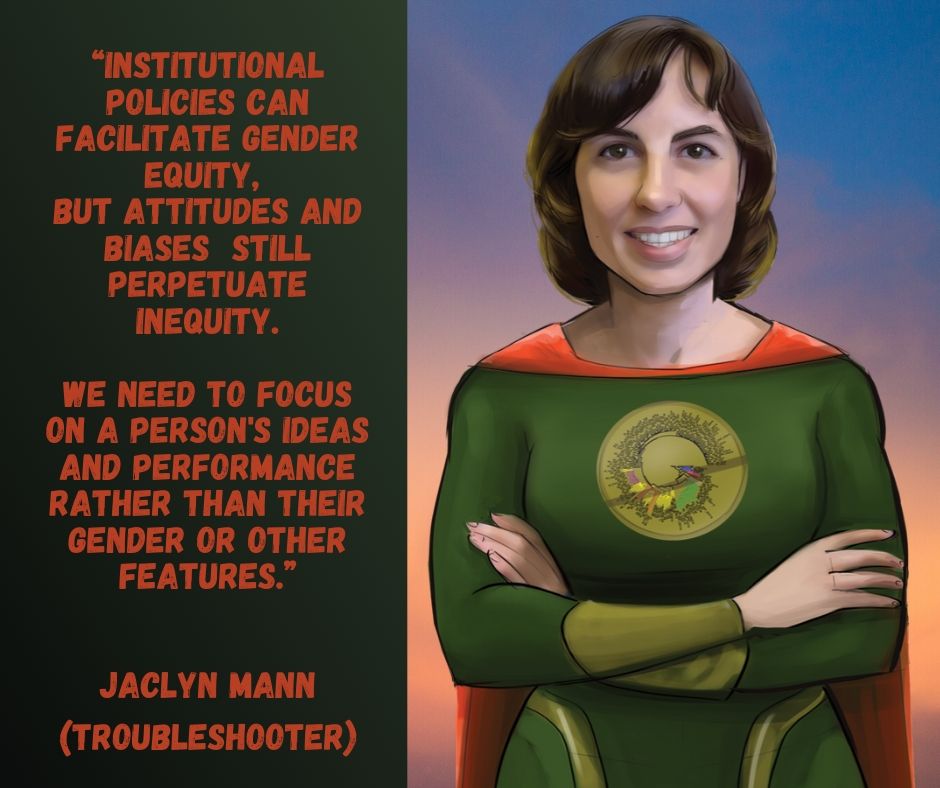 We have also given away thousands of calendars, cards and posters to young people to help change how science is seen and who sees themselves as scientists.

One of the biggest lessons I learnt from this project is to plan for different scenarios that could block your project progress and label them. When the global pandemic hit came it took me by surprise and I thought it was the end of this project. However, through speaking with my team and looking at multiple options we could adapt our plan and still achieve goals of this project. 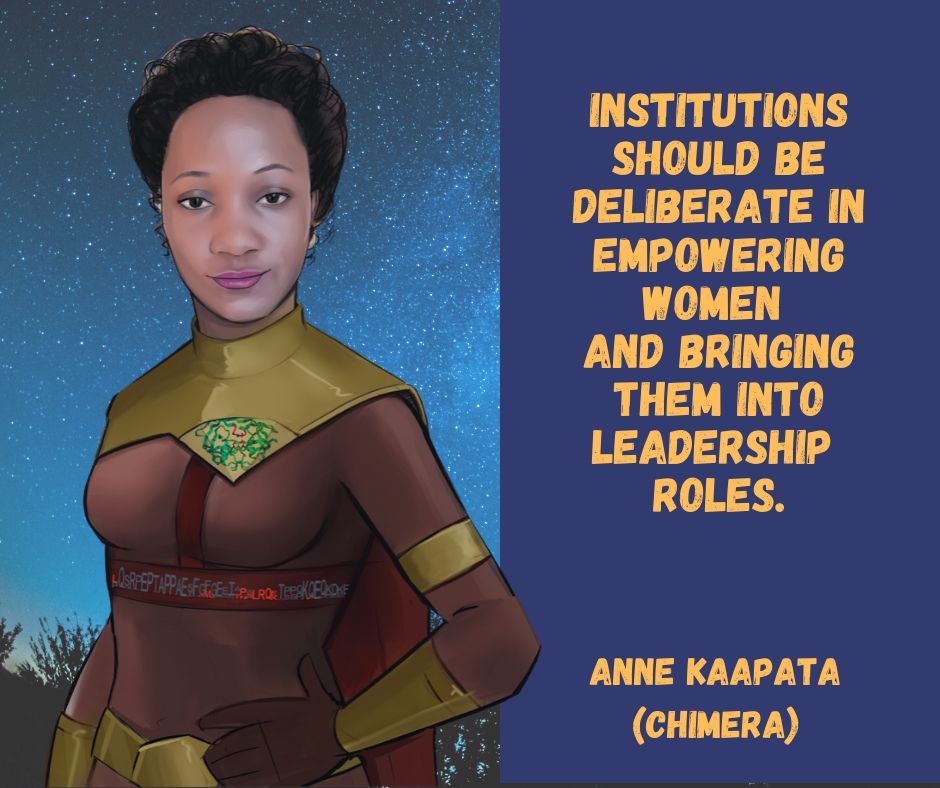 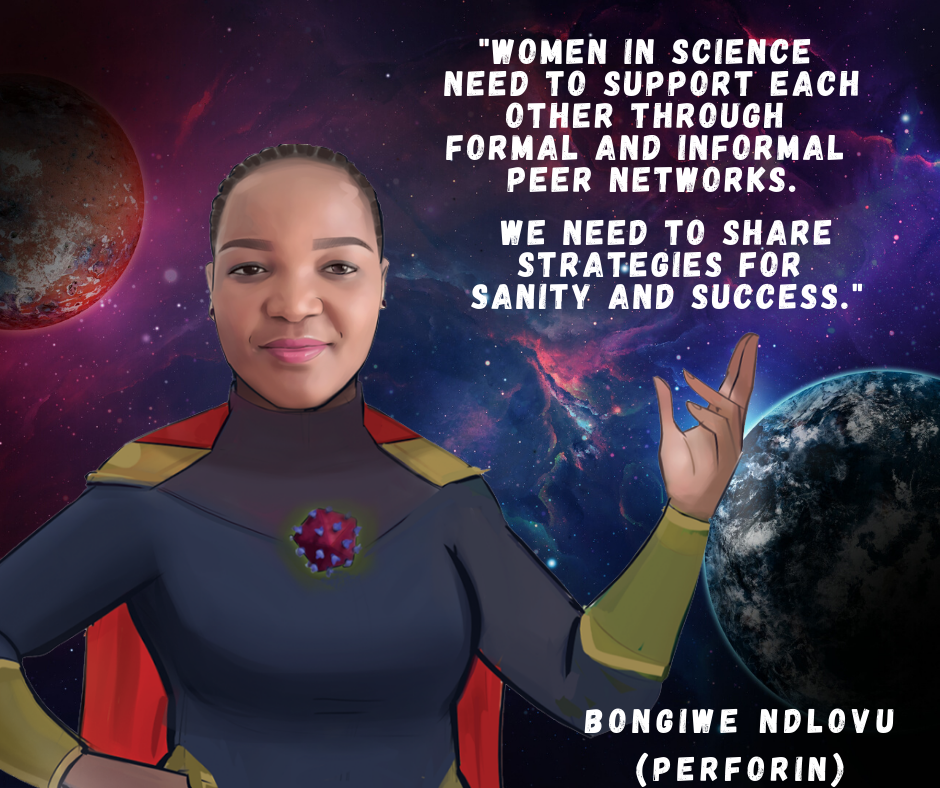 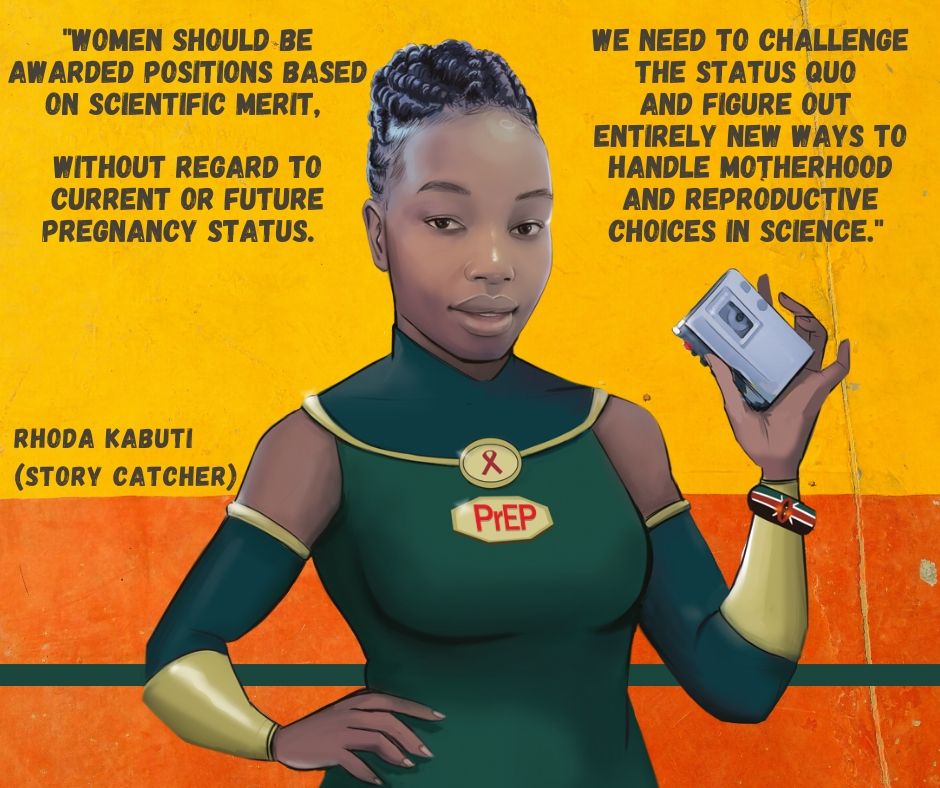 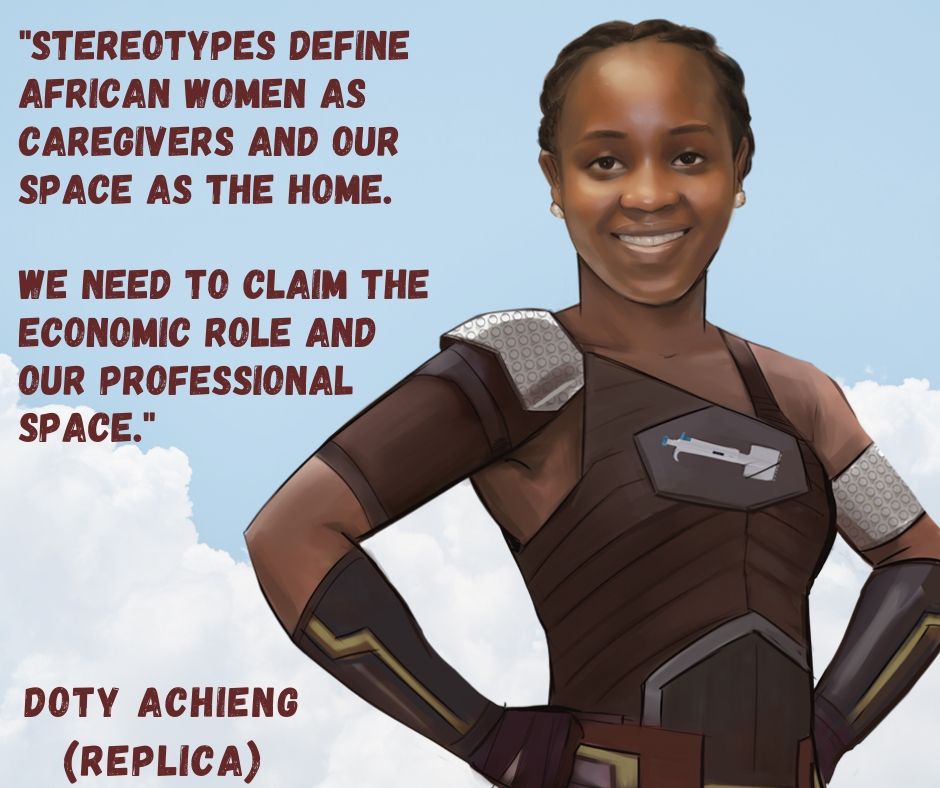 In this project we mainly focussed on raising awareness. This is because we believe being aware of the problem is a step towards finding solutions. During the social media campaigns and webinars, solutions to how these narratives can be combatted were raised. Further work needs to be done to fully engage African scientists and institutions in these conversations and to enhance commitment to achieving gender equity in science. Through raising awareness of the current barriers to gender equality, we can help researchers understand the problem and come up with solutions. 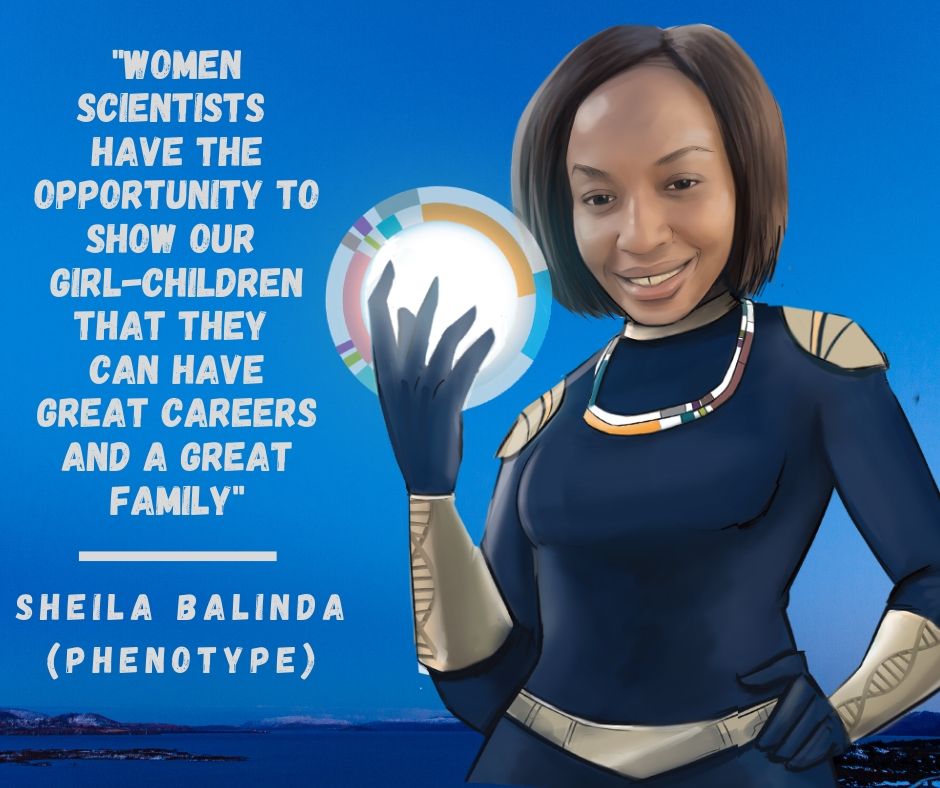 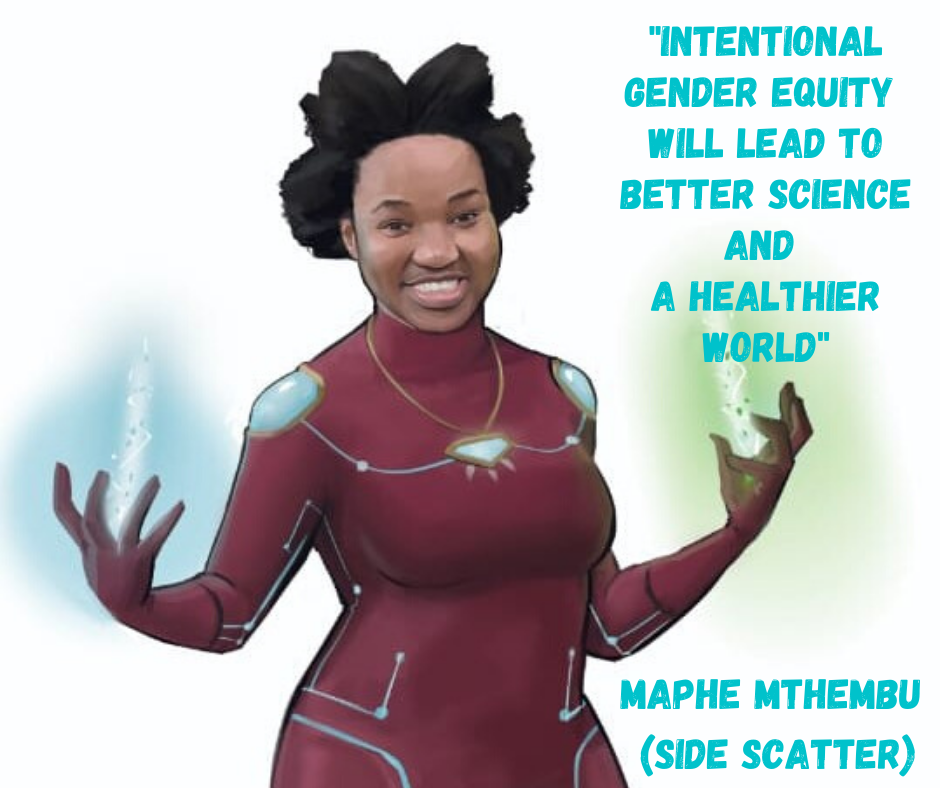 Creating the PowerPack of SuperScientists helped to structure the theme of the project and communicate our gender equity themes in a fun and engaging way. In this project we raised awareness of problematic narratives that inhibit the progression of women in science with a wide audience, including school students, researchers, and the wider community. 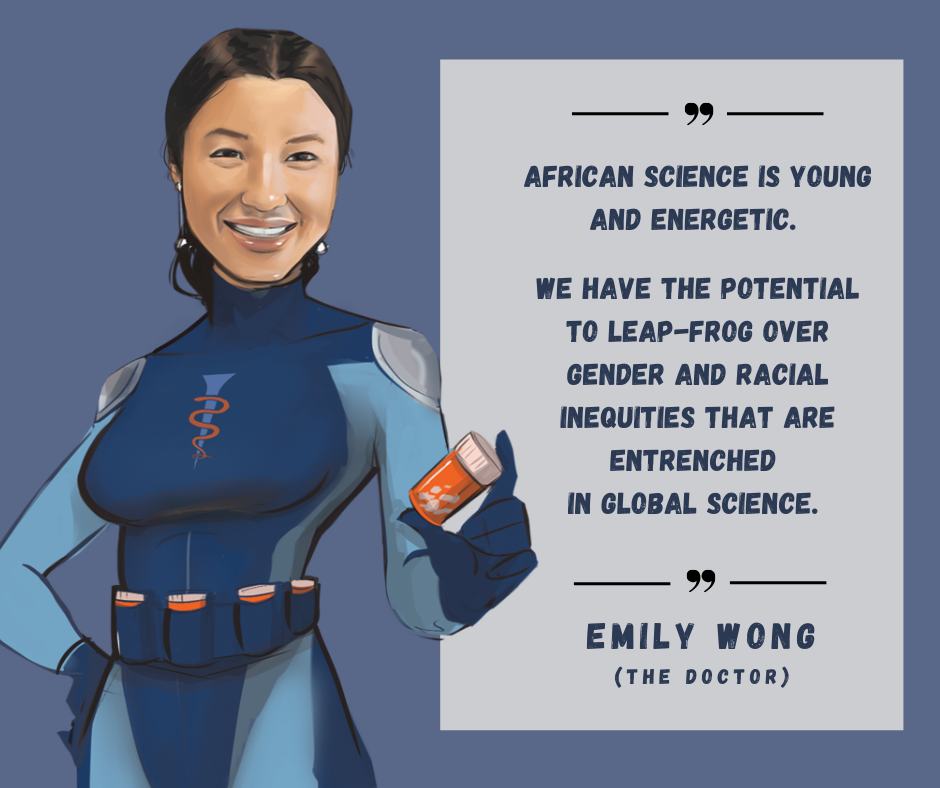 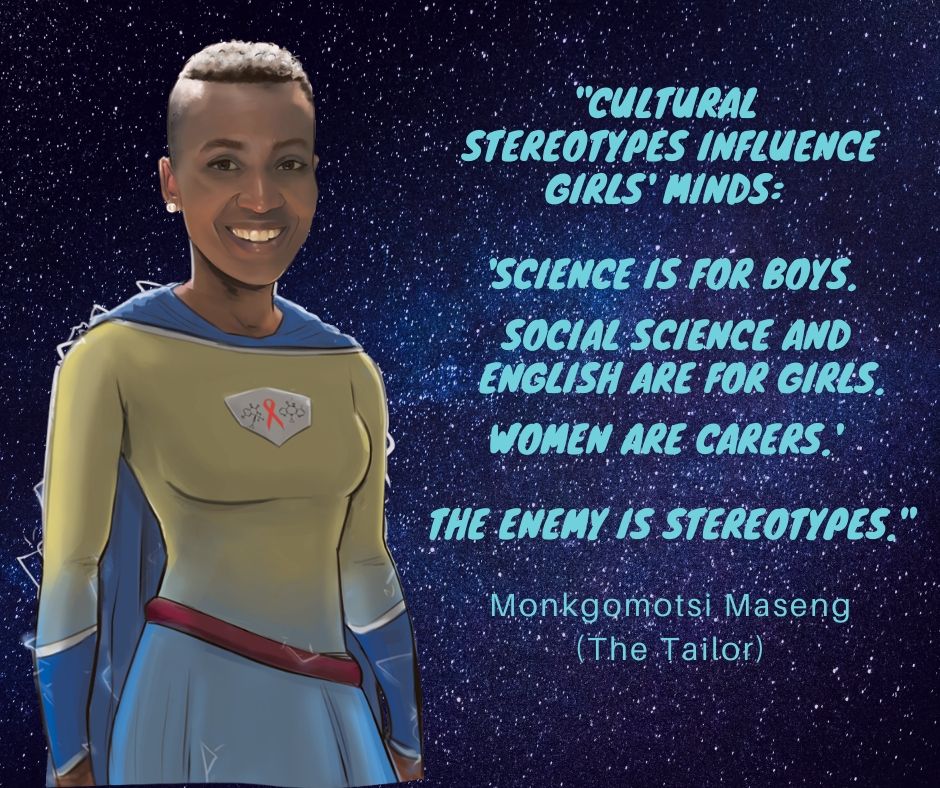 See more from the PowerPack of SuperScientists on their website