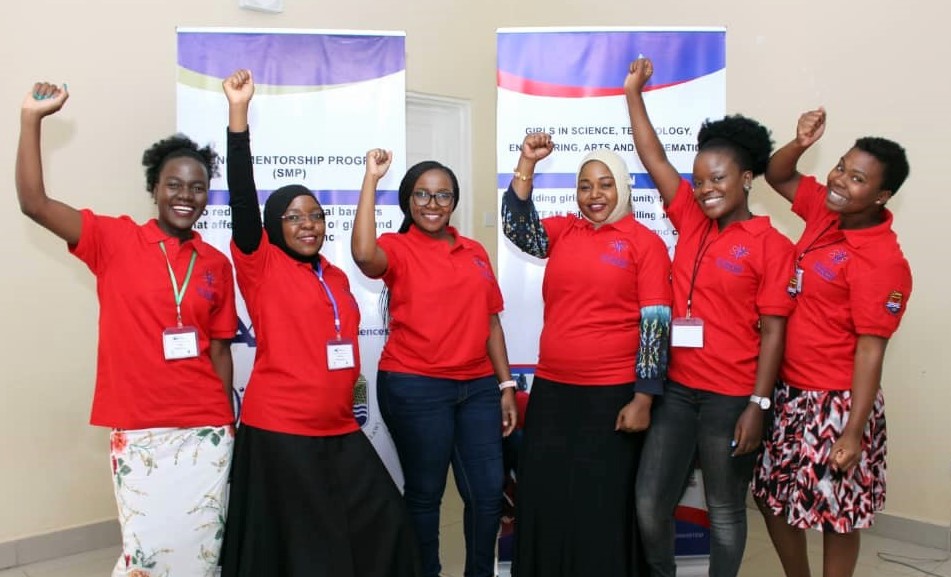 Science, technology, engineering and mathematical (STEM) fields are often dominated by men. Through an intensive mentorship program, this project set out to promote and encourage upcoming female scientists in Malawi to choose science career pathways and stay within the sciences.

Halima Twabi is a biostatistics PhD student at the University of Malawi Department of Mathematical Sciences. In her research she uses data to improve understanding of the impacts of interventions for pregnant women with HIV. She is involved in the DELTAS Sub-Saharan Africa Advanced Consortium for Biostatistics (SSACAB) training programme and has co-founded an organisation in Malawi called Girls in Science, Technology, Engineering, Arts and Mathematics. In 2020, she was one of 20 recipients of the L’Oréal - UNESCO For Women in Science Young Talents Award in sub-Saharan Africa.

In this article Halima describes her project, supported by the DELTAS Africa Community and Public Engagement (CPE) Seed Fund, where she set up a mentoring scheme to encourage young women to take on careers in science, through giving them positive and engaging experiences of what science, research and innovation are all about.

Women in science in Malawi

The disproportionate enrolment of men and women in the STEM fields at universities in Malawi has remained the same over the years. A 2003 study showed that the proportion of female enrolment in maths and sciences related faculties at the University of Malawi was less than 30% (Chamdimba, 2003). In the 2009 University of Malawi selection, 41% of the students selected into mathematics and science programs were female. Further to this, in 2015 the Malawi University of Science and Technology (MUST) enrolled 200 students of which only 9% were females. Action is therefore needed address the barriers to gender equality in science fields and support and encourage young women and girls to enter science careers.

Mentorship is an excellent tool for fostering success among college students. The lack of role models often contributes to fewer females choosing a science career.

The project aimed to expose young aspiring upcoming female scientists in secondary schools and universities to women in science professionals to promote, encourage and inspire them to advance their careers in STEM. The projects objectives focused on three main aims: 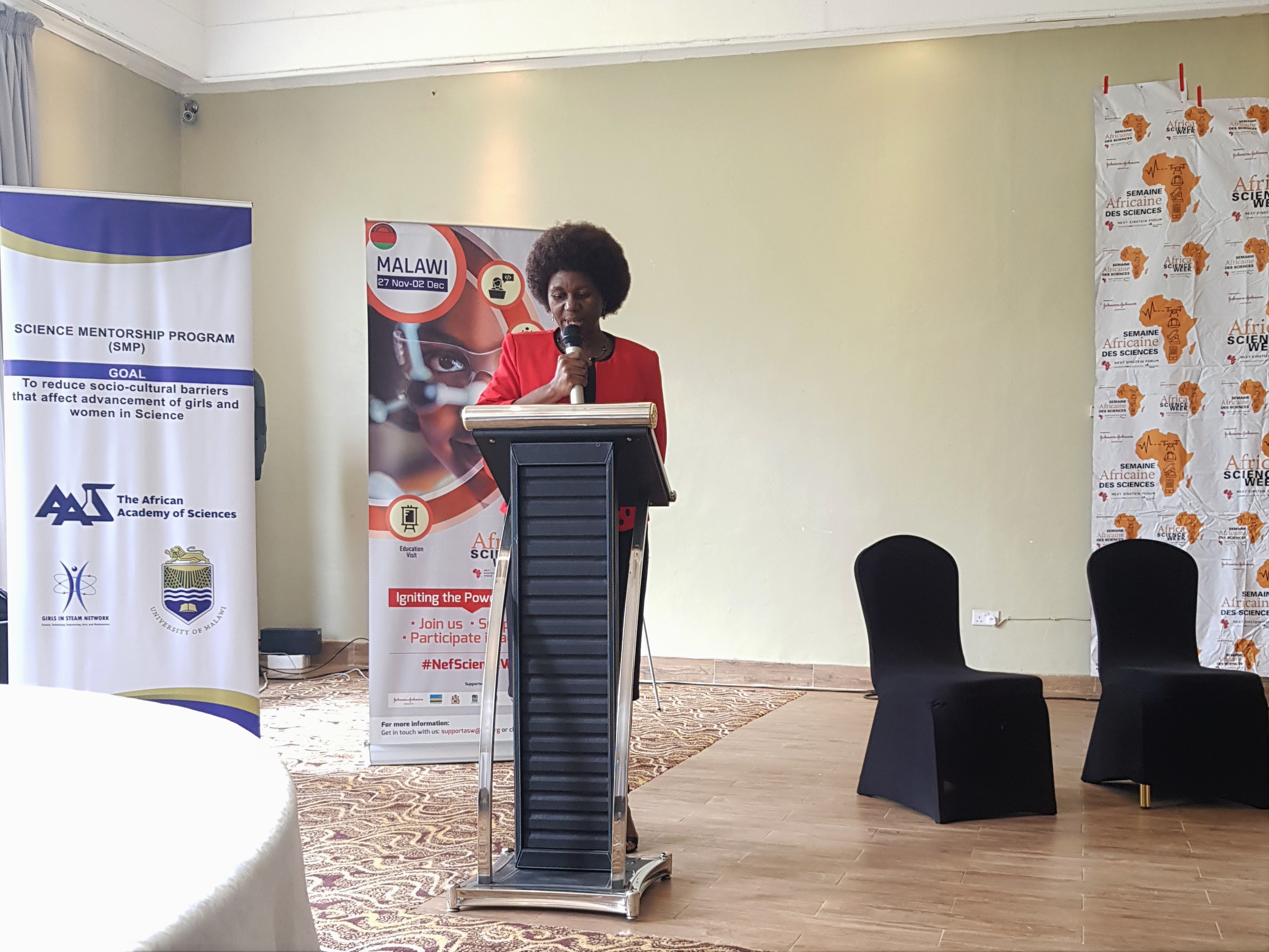 Associate Professor Victoria Ndolo, the former Deputy Dean of Science, at the Women in Science celebrations

In order to work with the students, we sought ethical approval from the principal of the two universities. We further sought approval from the education district manager as the project involved working with secondary school students. We created a call to recruit the mentees (female college students taking science degrees) from various universities across the country. The call was posted on social media platforms and the university dashboards. A diverse group of 22 mentees doing various scientific courses such as chemical engineering, mechanical engineering, statistics, human ecology, computer science and geography was selected. A group of 6 female scientists, were selected to be mentors based on their scientific background and research work.

The initial activity involved training both the mentors and mentees on mentorship, role modelling and networking. Each mentor was paired to four mentees from various backgrounds. Five formal face-to-face meetings were set for each mentor-mentee pair. An agreement on the goals and expectation of the mentorship was provided and signed by both parties. Informal sessions were unlimited and done through social media platforms, phones, SMS or through emails.

To ensure the community is engaged about the role of women in science, we held an event recognising women scientists and organised a panel discussion and focus group discussions, of which we had representatives from research institutions such as Malawi Liverpool Wellcome Trust and University of Malawi, College of Medicine, secondary students, educators and community representatives (mostly parents). The discussion topics included identifying and assessing challenges in the education system in ensuring the participation of women and increasing equality across STEM fields. It also included a discussion on how to diversify routes within education to increase the availability of high quality STEM careers, as well as encouraging recruitment and retention within these type of roles.

Continuing engagement and making a difference

We held further workshops on scientific writing, networking and scholarship applications. During the COVID-era, we held a webinars on how to cope mentally as a science student during the pandemic and on entrepreneurship. We produced two radio programs and one TV program, in which we discussed what the mentorship was all about and what it aimed to achieve. 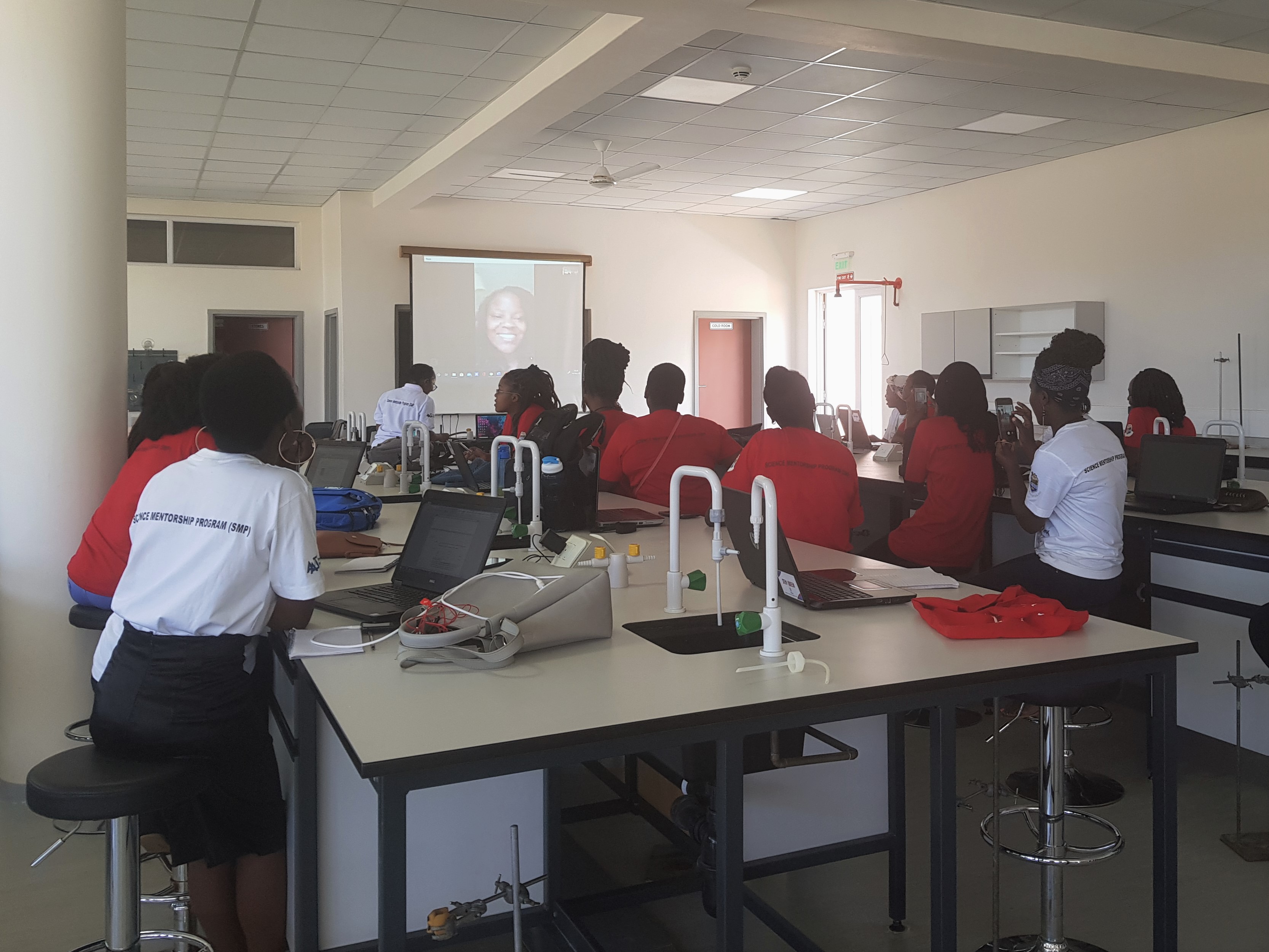 A workshop with the mentees

During visits to secondary schools, the mentees (university students) were given the opportunity to mentor secondary school students, passing on what they had learned, acting as career role models, and giving motivational talks. We also planned interaction sessions where one female STEM mentor could meet with 5 girls interested in STEM paths and exhibitions.

From the mentorship program, two of our mentees started science clubs in their communities, one focuses on promoting science among primary school children in Mzimba (rural part of Malawi) and the other one is for secondary students in Lilongwe. In addition, through the networking events, one of the mentees, a final year statistics student, was given a position as a research assistant for one of the researchers.

The mentorship program has been a fun and exciting journey, and the mentees gave positive feedback on its impact. One of the most important lessons we have learnt is that exposing young women to successful female scientists helps these girls to believe in their capability to embark on scientific careers, despite them being male dominated. We received feedback from the girls on how the mentorship program has opened their eyes to careers in science and allowed them to engage with and learn from women they see as role models. Giving a platform to women and girls in science to discuss their journey and seek advice also helps them to improve their scientific understanding and academic performance. 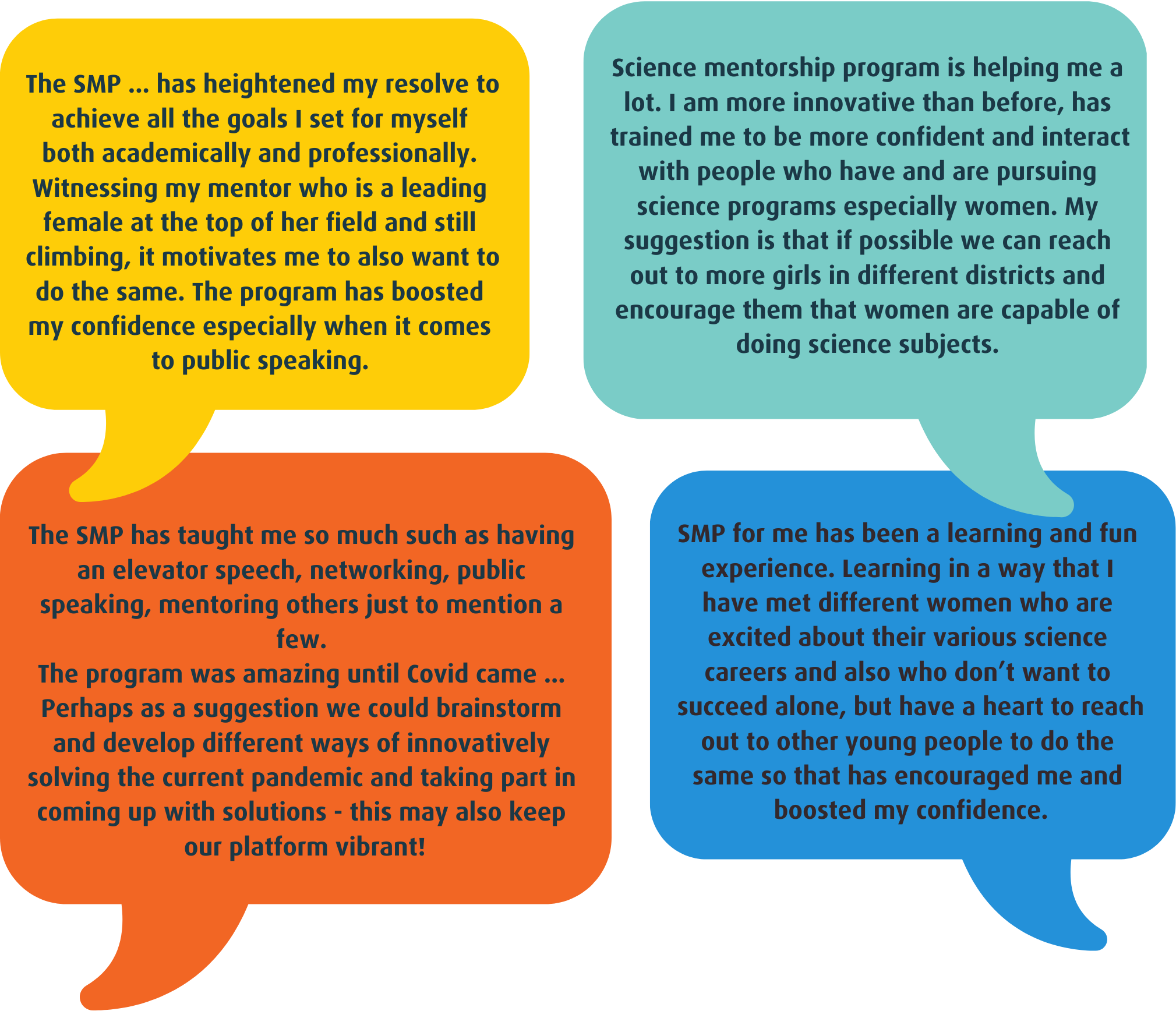 Feedback from participants from the Science Mentoring Program (SMP)

The purpose of the mentorship program was to create a ripple effect to the mentees, so that they could pass what they have learnt along to the next upcoming young scientists. The program could be replicated on a larger scale with more mentors (to achieve a 1:1 ratio) and targeting higher learning institutions. In addition, it is essential to ensure that mentees are paired with mentors within their scientific field.

From the project we have learnt that rarely do people talk about the importance of promoting science among women and girls. There is a need to increase radio programs and activities that involve engagement of the community such as parents, teachers and the stakeholders at large.